After Graham’s grandmother passed away, he brought home one of the things he was able to have as a keepsake…it was her recipe box.  I promised {not only to myself, but others in the family} that I would get all of the handwritten recipes scanned in and shared.

The first two recipes are for two different, yet oh-so-similar, chow mein dishes.  As you can see from the pictures of the recipe cards, most all of the recipes are void of any instructions.  I am not going to lie, it actually puts a smile on my face when I am trying to figure out what I am supposed to be doing with the list of ingredients.

I have tried my best to come up with instructions I think were meant for each recipe, but I am sure I am missing things here and there.  So, feel free to print off the recipe cards and make up your own process.  Tip for printing:  Simply right click the picture of the recipe card and hit print!

Specifically for these two chow mein recipes, I did make a few minor changes and we actually ended up liking a finished product that basically combined the two {yes, I cooked this meal about three different times to make sure I could write possible directions}! 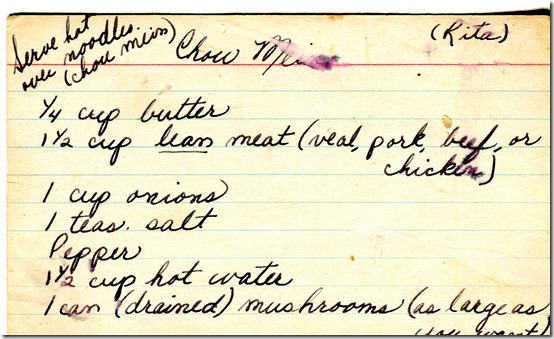 1 can (drained) mushrooms (as large as you want)

Directions (as made up by Jen):

Melt butter in pan; cook meat and onions in pan until meat is no longer pink; add salt, pepper, water, and mushrooms and cook until thick; serve hot over chow mein noodles.

— Instead of mushrooms (since they are not favored in our household), we used a can of black beans

— I cooked the mixture for about a half an hour and it was still pretty soupy, so I did add a tablespoon of cornstarch and a can of cream of mushroom to help aide in the thickening process (my mixture may not have thickened as much simply because I was using beans instead of mushrooms, but who knows!)

The chow mein noodles get soft pretty quickly, but there is still enough crunch! 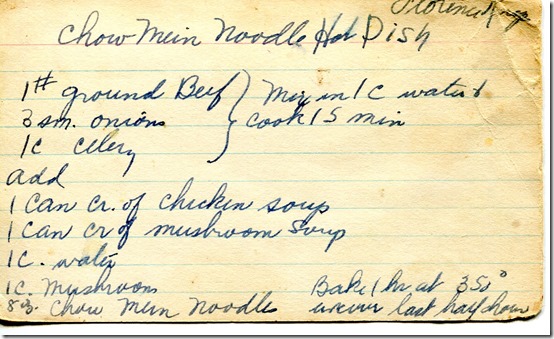 3 sm. onion (chopped) (I just used one large onion…at least it was large for me!)

1 can cream of chicken soup

1 can cream of mushoom soup

Pan fry ground beef, onion, and celery until beef is no longer pink; add in water and cook 15 minutes; add in cream of chicken and cream of mushroom soup; add in mushrooms and chow mein noodles; bake in casserole dish at 350 degrees for one hour (bake uncovered the last half hour)

— Used one can of black beans instead of mushrooms

As you can imagine, the noodles ended up puffing up and getting soft during baking, so the noddles on top helped provide a bit more crunch.  For even more crunch, do not cook the celery and onions with the meat, but instead add them in with the mushrooms.